The Secret of Motivating Kids To Learn Cursive

Handwriting, Cursive and Keyboarding Skills – When should kids learn them?

The short answer to when kids should learn the tools of expression, is when they need them to express themselves. As homeschoolers, we bought Mario Teaches Typing and cursive writing books and left them available for the kids to use. However, my kids never used them. They saw no use in practicing cursive or following a keyboarding program. As unschoolers, we let it go.

As toddlers, our five kids started out on keyboards handpicking letters but as they used a computer more and more often, they became very proficient and naturally started using the home keys to do a more coordinated and efficient way of typing. Nothing was taught. They picked it up on their own.

Cursive was another story. Much of their childhood writing was block letters. It was slow and painful for them to write and I have to say, a lot of their sentences were unreadable. When a child can’t write cursive, they can’t read it either. I had to recite the letters from Grandma to them. However, they still didn’t see a need to use cursive and rejected all my nudges and encouragement to practice. When they picked up the odd online course, they wrote all their letters, answers, essays, and email on a computer. They were truly digital kids that only used a pen to sign their name. Here is a sample from first year university: 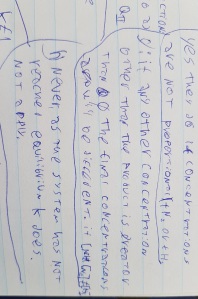 And then they went to university.

Now they were in trouble! Some university professors are very old school. Unless a student has a documented disability, they can’t bring a laptop to an exam. All essays must be handwritten, even in the humanities. And all exams have time limits. My 4 kids were at a distinct disadvantage by being forced to write timed, handwritten exams (even in the sciences) by using block letters.

In typical unschooling fashion, they decided that cursive might be useful after all! They asked me for resources. I dug out the old cursive writing book from grade 1 and they practiced. They practiced by copying sentences from favourite story books like Cat In The Hat for about 10 minutes a day, and used their cobbled cursive for taking notes in class. At least they could read it. In about 3 months they had a readable cursive style that was acceptable for handing in lab reports and essays and they scored much better on exams. Here is a sample after 3 months of practice in first year university: 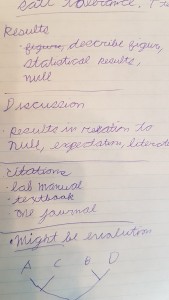 The moral here is that when kids realize they need a skill, there is no stopping them from learning it. Trust that they will know when that day comes!

3 Responses to The Secret of Motivating Kids To Learn Cursive

This site uses Akismet to reduce spam. Learn how your comment data is processed.